The Winnipeg High School Football League’s purpose is to provide high school students and coaches a quality football experience in an educational setting while assisting the students in developing life long learning skills. 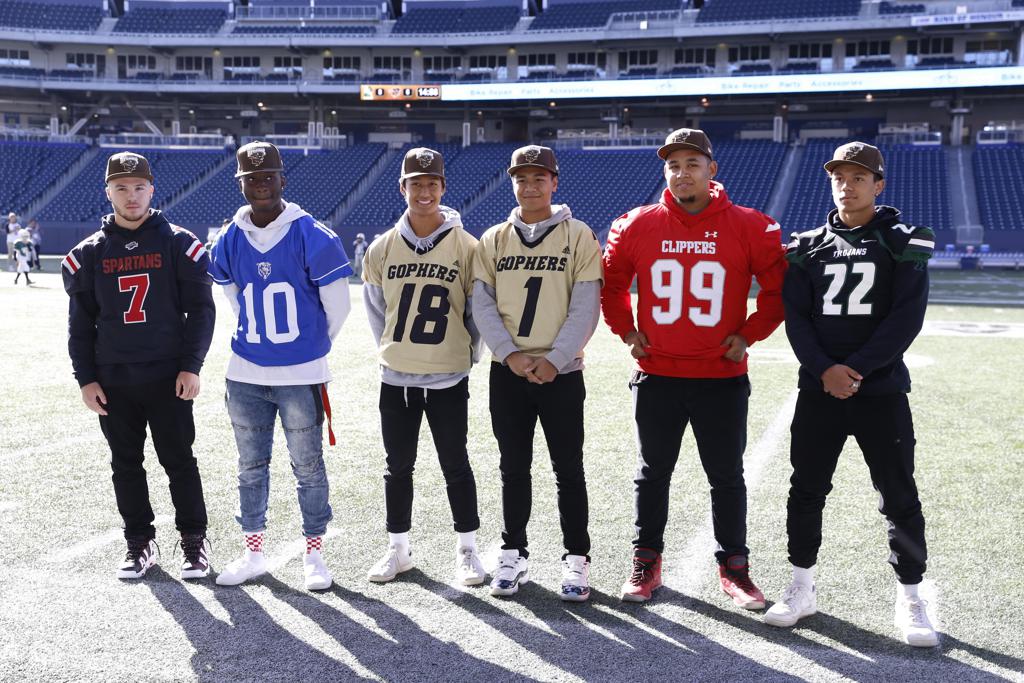 Thank you to WHSFL JV commissioner/varsity assistant commissioner and long-time league advocate Brian Marks for his help with the below historical sections. 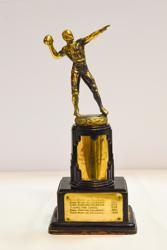 The Inter High Trophies: The Original
The organization of the Winnipeg High School football League in 1933 required the commission of a trophy to suitably crown a league champion. The league consisted of the “Big Four”, DMCI, St. John’s, Kelvin and Gordon Bell from the Winnipeg School Division #1 and the addition of St. Paul’s High School. St. Paul’s had been playing in a provincial league that included rural teams.

The trophy was donated by the T. Eaton Company; Canada’s prominent retail giant. It was suitably named the Eaton Trophy. The trophy features a quarterback in the throwing motion on a simple pedestal. The statuette is noteworthy for the time in that the helmet is the “leather style” and has no face mask. The base is in two tiers, a small tower with inscription and a rectangular base recording the early winners. The tower is either Bakelite or Catalan, early synthetic forerunners to plastic. This substance was standard in the design of radios from the era. It was
considered quite “Chic” and modern. The rectangle is wood. Kelvin High School was the first team to win the trophy.

Of note historically, there is no winner for 1933 or 1953 as the great raging polio epidemics of the time stopped all extra-curricular activities during those school years. Championships and games were however played during the Second World War. 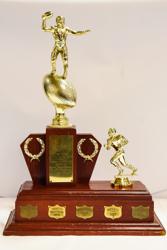 In 1957, the WHSFL commissioned a second Inter High Trophy. It was again donated by the T. Eaton Company, and again named the Eaton Trophy. It was awarded to the champion of  "The Annual Competition of the Winnipeg Inter High Rugby Football League" -- the same inscription as the original.

This trophy is larger; having two statuettes on two wooden tiers. The tiers had room for several champions, but it was not to be. 1967 was Canada’s Centennial year (100 years. of Confederation). The league decided to retire the Inter high Trophy and replace it with a newly commissioned “Centennial Trophy” So the last plate on the
Second Inter High Trophy was etched in 1966. Fittingly, the winner was DMCI, the school’s 11th win. The school has since won the league championship several more times and is on the Centennial trophy. The last Championship was 2017.

The league has given the trophies to DMCI for safe keeping in their Alumni room. DMCI will celebrate the school’s 100th anniversary in 2022. The league will celebrate its 100th anniversary in 2033. It encompasses more than 50 teams at the varsity and junior varsity levels and has a geographical footprint that extends from Winnipeg, West to Portage and Brandon and East to Springfield, Steinbach and Northwestern Ontario in Dryden, Kenora, and Fort Francis. Both trophies should be on display and made available to the league for that purpose.