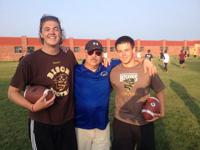 Long-time Winnipeg High School Football League (WHSFL) coach, commissioner and supporter Rick Henkewich is heading back to his roots. Recently, it was announced that the 50-year football veteran will step into the head coaching role at Garden City Collegiate, a program he started in the mid-2000s. Henkewich will assume the reigns from Beau Wilkes, the school’s bench boss for a decade, who’s taking a step back from the program but will still be involved at the school. .

In just a few seasons under Henkewich’s watch, Garden City erupted from a start-up program all the way to Division 1. Wilkes then anchored the ship, as the Fighting Gophers maintained a consistent presence in the WHSFL’s top tier until 2019.

It’ll be back to the drawing board for Henkewich and his staff in 2021. The ongoing global pandemic resulted in a lost season in 2020, along with uncertainty regarding numbers going forward. But the gridiron veteran isn’t worried. He’s seen it all, and is eager to replicate the success he had with the school the first time around.

“When I first came to Garden City, I had no idea what I had. As our first season started to progress, we found out really quickly what we had, where we were going and how we were doing it. I think this will be the same,” says Henkewich.

“The guys will work hard. The school has changed population-wise, but I’ve walked the halls and talked to guys already and I think we’ll start to see guys coming out. Beau is going to be working hard in the school, and I already started talking to guys about getting their buddies out.”

“It was literally putting you in a library,” he noted of his time on the Winnipeg Blue Bombers and Edmonton Football Team’s staffs. “You learned everything from philosophy, to technique to coaching styles. The list just goes on. Those guys were amazing.”

It was under Stubler that Henkewich – a sponge for learning new tricks of the trade – picked up key schemes in the secondary, such as match coverage. He also learned the value of cover four.

“[Cover four] makes you have to work to go down the field,” he says.

“Frank Smith, when he coached at UBC, was almost exclusively cover four. And one of the things that I learned from Rich Stubler was to sit in that cover four as much as you can. It works, and I can still run match off of that, and I can blitz off cover four, make no mistake about it. We can do a lot of different things off of it.”

Last time Henkewich was with Garden City, he had a pair of shutdown corners in Tyler Williams and Cody Mages who executed match schemes to perfection. Mages led league in interceptions in 2008, as the Fighting Gophers advanced to the Division 2 finals.

“What we did in a lot of cases is run a coverage called razor. Razor took inside press coverage on you and we jammed you ten yards and released you, but the quarterback reads inside press coverage and he’s thinking it’s man and that there’s a blitz, so he’s looking to hit that, but he’s throwing right into our coverage,” he recalled.

“You really have to understand how to play that, and I had the two guys who could. My halfs weren’t all that good, but by the time the receivers were let go, the halfs were in position.”

Offensively, Henkewich took advantage of quarterback Ryan Ozunko’s high football IQ, making adjustments at the line of scrimmage while transitioning the Fighting Gophers into the league’s most dangerous passing unit. Ozunko threw 23 touchdowns in seven regular season games in 2008, a record that still stands to this day.

“Him and I were together all of the time. After practice we’d go back and look at film, we’d do everything,” noted Henkewich of his former pivot.

“We always had a thing with Ryan Ozunko and our wideouts. If we saw inside press coverage, the receiver would call ice. I even did it at Sisler with [Steven] Koniuck a couple of times. If we saw inside press coverage, I knew I had one-on-one coverage and no safety, because now we know the safety is down low and there’s a blitz coming if he’s doing that. We could just call ice, the quarterback taps his helmet and we’re throwing the ball deep. It’s an automatic call. That’s where Ozunko put up half his numbers. A lot of those touchdowns were because of that play.”

Long story short, Henkewich is a student of the game who’s well equipped to handle whatever roster is in front of him. He can “dummy” his CFL offence down to fit almost anybody and preaches hard work above all else.

He’ll be sticking to one unit for per day when the team gathers for padless practices in the spring. By doing so, the group will have a full field to work with, and a greater opportunity for shared learning.

“I demand a lot of things from the players. It’s nothing that wasn’t demanded of me when I played. I just tell them you’ve got to work hard. Hard work will result in success. We talked about what it means to be in our league, and what it means to represent their school, and the fact that you’re held to a higher standard as a football player. They’re already starting to understanding that.”