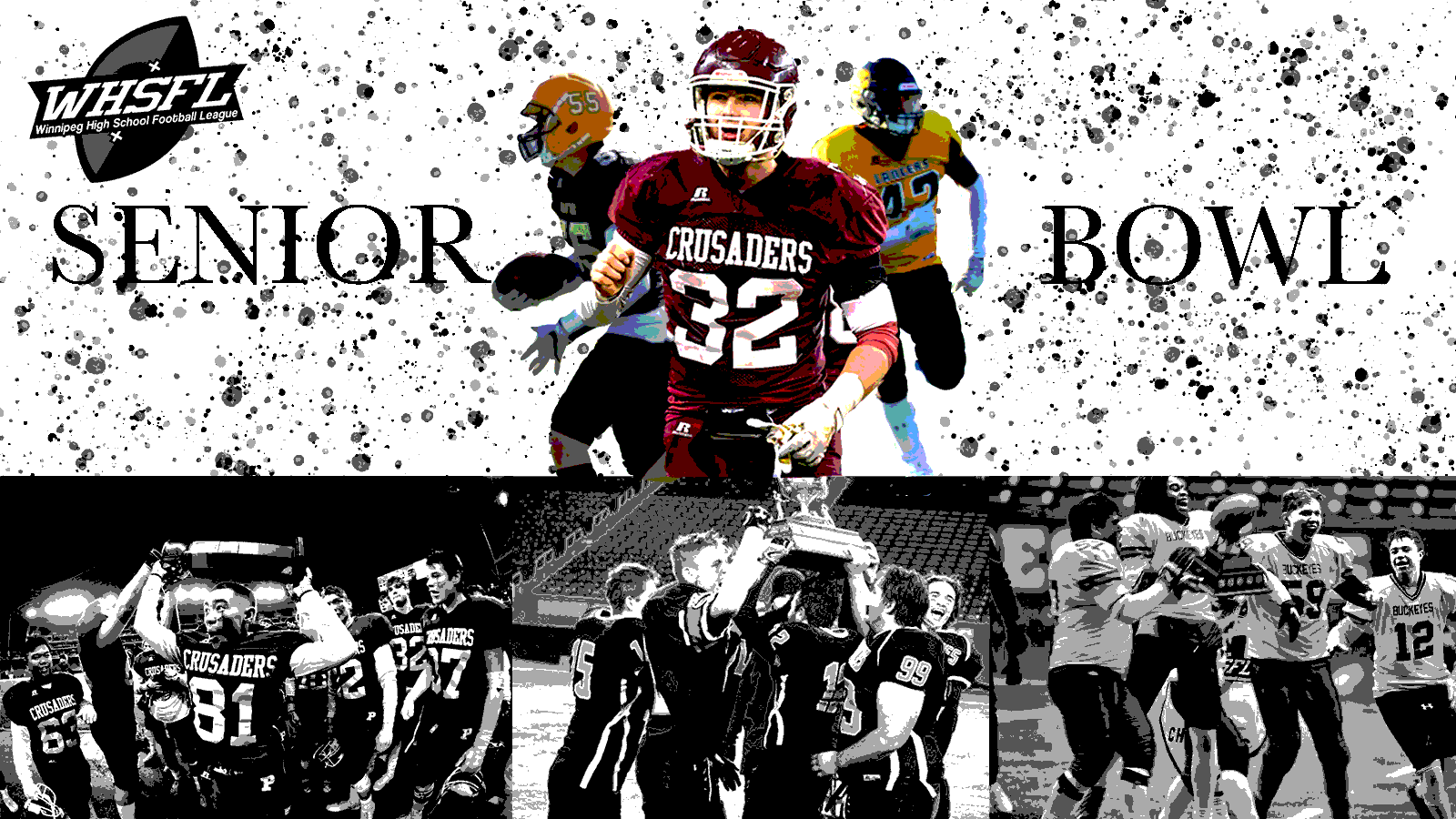 The Winnipeg High School Football League (WHSFL) is pleased to announce the selections for the 2020 Senior Bowl, the full list of which is viewable by clicking the link at the top of the page.

Due to COVID-19, there will be no formal game this year. Nonetheless, the WHSFL would like to acknowledge and thank each athlete for their dedication and contribution on the gridiron over the years.

Included in the list are 27 standouts who will be playing either university or prep school football this coming season, spread out across two different nations and eight different U SPORTS teams.

Additionally, over 30 athletes will be taking their talents to the junior football level, suiting up either locally or in the British Columbia Football Conference.

“To be selected to the Senior Bowl is an honour in itself. To be selected to this particular group of seniors is a recognition that carries a lot of weight, as we have some of the best student-athletes in the country graduating this year,” WHSFL league commissioner Jeffrey Bannon said.

“The increasing number of players from our league moving on to the next level shows that the level of competition in the WHSFL is being nationally recognized. Congratulations to all, and continued success both on and off the field.”

The River East Kodiaks – who moved up to Division 1 last year in impressive fashion – lead the way with 13 selections.

Defensive lineman Brandyn Linklater, a former member of Team Manitoba who will be playing for York University in 2020, is one of the notable names from the school. Fellow Team ‘Toba alumni Reece Wyke (receiver/kicker) and Landon Colburn (safety), who were instrumental in helping the Kodiaks win the CTV Bowl in 2018 are a few other headliners.

Just behind the Kodiaks in terms of players selected were St. Paul’s (11), Dakota (ten) and Fort Frances (ten). The Crusaders won this past year’s ANAVETS Bowl, while the Lancers lost just one regular season game and advanced to the semi-finals. The Muskies took home their first-ever league title in 2019 with a victory in the Division 3 championship.

Five of the 11 Crusaders selected will be suiting up for a U SPORTS team this coming year.

Receiver Zach Wynne – co-winner of the prestigious Harry Hood Memorial trophy – along with CFC Prospect game alum Kundanji Sinkala (LB) and Team Manitoba alum Brandon Slobozian (DB) are all staying home, signing their letter of intent to play for the University of Manitoba Bisons. Versatile quarterback/running back/punter Te Jessie, another Team Manitoba alum/2019 ANAVETS Bowl Offensive MVP will be taking his talents to the OUA to play for the Carleton Ravens. Fellow ‘Toba alum Charlie Polet (DB) will join him in the OUA, as he’s set to play at the University of Toronto.

On top of the five players mentioned above, game-changing linebacker Nathan Carabatsakis, a co-winner of the Division 1 Most Outstanding Player award in 2019, will also be moving on to the next level. He’s accepted an offer from Clearwater Academy International – a talented prep school in Florida – and is one step closer to achieving his dream of playing in the NCAA. The 2019 ANAVETS Bowl Defensive MVP has already received a Division 1 offer from Campbell University in North Carolina, and is sure to receive more going forward.

Two selections from the Dakota Lancers will also be suiting up at the U SPORTS level in 2020, in defensive linemen Jordan Friesen and Ethan Papineau, who combined for 121 tackles and 24 sacks last year.

Friesen – the Division 1 Lineman of the Year in 2019 and co-Most Outstanding Player – was one of the University of Manitoba’s earliest signings and is expected to be a pillar on the team’s front four for years to come. Papineau will be heading to the AUS to play for the Mount Allison Mounties – a school that an increasing number of WHSFL alum have called home over the years.