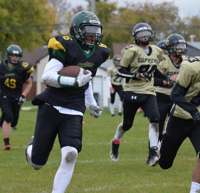 Nathan Udoh was a standout this season for Miles Mac

All three varsity championship games this season will be occurring on a special date of “super” Saturday, Nov. 16. Please note that the times are subject to change. Check www.whsfl.ca for any updates. All games can also be viewed online at lrsd.tv.

The Division 2 championship (CTV Bowl) features the top two teams from the regular season, in the Portage Trojans (7-0, top seed in the Bramwell conference) and the Miles Mac Buckeyes (6-1, top seed in the Vidruk conference). It will take place at 1 p.m.

The Buckeyes will be looking for redemption, as their only loss of the season came against the Trojans in week three. The contest was the tightest matchup Portage had all year, as they held on to win 23-21.

The result really speaks to the parity between the two teams, as no other squad put up more than 14 points all year against the Trojans, who outscored their opponents 448-68 with three shutouts. The Buckeyes were just as stout, outscoring their opponents 288-40 with four shutouts.

Fort Frances advanced to the championship game with a tight 28-22 win over Maples, a squad that had beaten the Muskies earlier in the year. The squad from Ontario rocked and rolled all year long with standout senior pivot Brady Meeks, who threw for 1,045 yards and ten majors while also rushing for 650 yards and nine scores. A total of 349 of those yards and six of Meeks’ passing touchdowns occurred against Churchill on Sept. 27, both of which shattered the single-game record for the division.

On the other side is head coach Kirkland Harper and a Bulldogs team that pulled the upset of the season last weekend, knocking off the top seed and previously unbeaten Springfield Sabres 28-14. Churchill played the game with just 21 players, demonstrating their heart and resolve to get to the title game.

The Division 1 championship, contested at 7 p.m. (ANAVETS Bowl) once again sees perennial powerhouses Vincent Massey and St. Paul’s duking it out. The two squads were pushed to their limits this season, as the Crusaders finished in a three-way tie for first in the Potter conference at 6-1, while the Trojans went 5-2 and finished first in the Gustafson conference.

St. Paul’s defeated Vincent Massey 22-2 in week four and will be looking for redemption after falling in the championship game last season to the Trojans.

Defence was the name of the game all year for the Crusaders, led by one of the nation’s most highly sought-after recruits in senior Nathan Carabatsakis. He had 37 tackles, three sacks and two interceptions in the regular season, one of which occurred at a key time in the second half against Massey to seal the Cru’s win.

Offensively, receiver Zach Wynne had 558 receiving yards and also tied the Division 1 record for receiving touchdowns in a season, with 11. He was also huge in the semi-finals last week with a key major in a 23-16 win over Steinbach.

The Trojans got 855 yards and ten scores from grade 11 Negus Lewin at running back. He was also Massey’s best offensive player in a 14-9 win over Dakota in the semi-finals. The feel-good story comes courtesy of receiver/defensive back Shad Nkiasi-Nsebwir however. He had 183 yards receiving in the regular season before suffering a nasty knee injury against the Crusaders. He came back last week and had the biggest play of the game with a second half pick six.

“The WHSFL would like to commend all of our teams for a great season and specifically the six who have advanced to the championship final,” WHSFL commissioner Jeffrey Bannon said.

“Friends, family and media will have the opportunity to witness a rare Saturday triple-header this weekend full of fun times and great football.”