Adam Fast was the standout, finishing the contest with 86 yards on six grabs and two scores, as well as 11 tackles on defence. 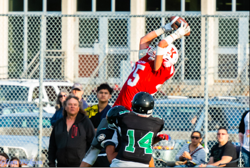 Senior receiver/defensive back Adam Fast makes an insane catch for a touchdown against Murdoch. Photo by Glenn Dickson.

The 2019 WHSFL season marked the return to Division 1 football for both the Kelvin Clippers and the Murdoch MacKay Clansmen. With senior pivots Daniel Moroz (Kelvin) and Carter Kutzman (Murdoch) both back a year after leading their teams to the Division 2 championship and semi-finals respectively, anticipation was high to see what they and their squads would be able to do in the top tier.

The matchup at Kelvin last Thursday didn't disappoint, as the game went right down to the final play with the Clippers emerging the 28-23 victors.

Despite the abilities of both quarterbacks, it was the defence that came to play in the first half. Senior linebacker Mason Plischke, a captain for the Clippers, led the way with three quarterback sacks (four total) while teammate Willem Guzzi had an interception. On the other side, Kadin Urciuoli wreaked havoc in the Kelvin backfield and finished the game with a team-high seven tackles and a sack.

There were a total of three safeties given up in the first half, two of which were forced by Murdoch who also had the long major, scoring on a Kutzan quarterback sneak following some big chunk plays from sophomore receiver Mekhi Tyrell. He ended the contest with a game-high 154 yards on just four receptions, showcasing his speed.

Trailing 9-4 entering the second half, Moroz and company started to go to work through the air.

After a Murdoch safety, the senior gunslinger found veteran Robin Brooks for a deep touchdown that gave the home side a 13-9 lead with 7:30 to play in the third.

Senior Adam Fast -- a captain and provincial team player who went both ways for the Clippers -- then added to the team's lead with his first of two absolutely ludicrous catches where he high pointed the ball in traffic and came down with the pigskin for a major to give his squad a 21-9 lead after a two-point conversion.

Fast wasn't done there though, as he added to Kelvin's lead with two minutes to play, hauling in his second touchdown while finishing the contest with 86 yards on six grabs and two scores, as well as 11 tackles on defence.

"It was kind of the plays we practiced," Fast said regarding his two insane catches postgame.

"The ball was thrown perfectly by [Moroz] and we executed. I'm glad we did."

Down 28-9, the Clansmen kept fighting. First, Tyrell snagged a deep touchdown grab to narrow the score to 29-16 with 1:19 to play and on the following series, Kutzan did his thing with a long touchdown -- finishing the game with 81 yards rushing and two scores. But it was too little too late as the ensuing onside kick with four seconds left was recovered by Kelvin.

Next up for the Clippers (1-0) is another home game against the 1-0 Dakota Lancers this Friday while Murdoch will face Steinbach (0-1) on the road.